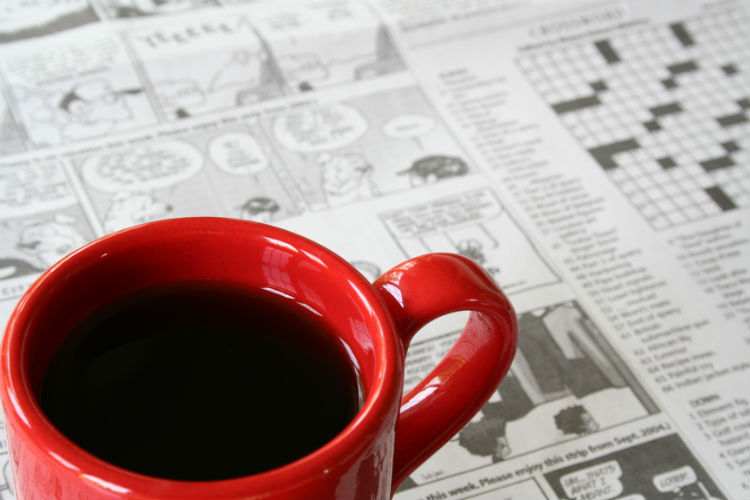 Mum loves jokes, just like the rest of us. Well, almost all of us. I guess there will come a time when, for Mum and me, humor won't work anymore.

In the meantime, my mother still gets the daily newspaper delivered to her room at the rest home. Several times a day she studies the headlines, browses a few stories and checks out all the death notices. “I always read the family announcements,” says Mum. “It’s important to see what’s happening with my contemporaries.” She also shares the occasional comic with whoever’s around.

There’s one comic Mum particularly likes. It’s a series of wry observations on children and parenting called “The Little Things.” It’s nothing more than a few words alongside simple line drawings of children and their exasperated parents.

It’s a great formula for Mum. The whole joke is contained in a single frame with instantly recognizable behaviors. There’s nothing in there that’s much different from when my mother had young children and nothing that relies on recent memory.

A couple of weeks back, Mum was sitting on my sofa, knitting. Her granddaughter, Harriet, was flicking mindlessly through her Facebook feed. “Look, Nanny,” she said. “You might like these.” She shuffled across the room and introduced my mother to Classical Art Memes: cartoons featuring well-known classical paintings with modern, ironic quotes inserted as text.

The first was a self-portrait by Van Gogh—the one of him with the extra-large ear. The caption read, “When you hear your name in a conversation.” This was followed by Rembrandt’s dark, brooding self-portrait. “If it it ain't Baroque, don’t fix it,” was the caption. Harriet and her grandmother were highly amused. They spent a happy half-hour searching for the best examples they could find.

When Mum’s birthday came 'round, Harriet knew exactly what to make—a special collection of classical art memes. “Great idea,” I said. But then I warned her against making a book. “Your grandmother will read it once and put it away. You need something like a calendar; something designed to go on display.” So Harriet settled on the desk calendar format, spiral-bound, with one classical art meme for each month of the year. She set to work, choosing the most recognizable art works and culling anything too rude or obscure. It took quite a while.

By the time the calendar had been ordered and arrived, we were already a couple of days post-birthday. Harriet picked it up and hurried to the rest home.

To say Mum loved it would be a huge understatement. She adored it. The calendar was so well produced, Mum was convinced it had been bought ready-made. Harriet tried, but failed, to explain the concept of customized cut-and-paste calendars, but Mum was too busy checking it out.

“I’m delighted,” gushed Mum, leafing through the calendar for the third time. Then she flicked back to the start and went through it all over again.

“You know dear,” Mum began, “I recognize all of those paintings.” She put the calendar down.

“It’s lovely! You completely understand my sense of humor.”

Family Caregiver Humor
Be the first to comment
Related Articles