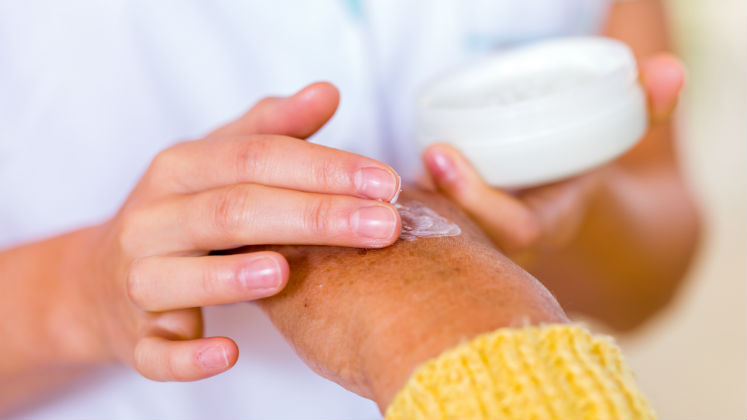 Caring for an elderly loved one comes with many challenges. One of the greatest emotional hurdles faced by caregivers is feeling powerless when faced with a problem they don’t know how to address. A question that often comes up in the AgingCare.com Support Groups is about compulsive skin picking. A number of caregivers have expressed concern about the tendency for their loved one to repetitively pick or scratch their skin to the extent that it causes damage and even injury. Thinning skin and decreased healing capabilities exacerbate the problem, as there is greater risk for the development of open wounds and infection.

There are a variety of reasons why a senior may be engaging in this behavior, one of which is the possibility of having developed a Body-Focused Repetitive Behavior (BFRB) known as excoriation disorder or compulsive skin picking disorder. This is a widely experienced, yet little known disorder characterized by the urge to compulsively pick, scratch or pull at any area of the skin. However, it is important to note that one of the diagnostic criteria for excoriation disorder is the exclusion of any other medical or psychogenic reason for the behavior. It is therefore important to first rule out any dermatological conditions such as allergic rash or medication side effects, and to exclude the presence of tactile hallucinations or delusional thought patterns, which are common in some forms of progressive dementia. It is therefore imperative that you consult with your prescribing physician or health care professional about your concerns.

What is excoriation disorder?

One of the key features of this disorder is that the person is aware that their behavior is not good, and actually have a desire to stop, but the compulsion to pick, scratch or pull is too strong to resist.

Brittanylee88 described her experiences with her mother and this condition on the forum:

Shame and guilt are a common consequence of this disorder, and is often the reason many suffer with this condition in silence, making it one of the most under-diagnosed mental health concerns. It may be that your parent always was a skin picker, but was able to be hide it, which is very common among skin pickers. The most common picking site is the face, but it can affect any area of the body. There is no single cause for the onset of excoriation disorder, but there is some evidence that a genetic component may come into play, and other studies indicate a strong link to difficulties with emotional regulation. There is a high comorbidity of compulsive skin picking with Obsessive Compulsive Disorder (OCD), depression and anxiety.

Why do they pick?

The sensation of pulling scabs, scratching or picking at the skin can be very pleasurable for some, while others describe a feeling of tension release when picking. It can also have a calming effect as the sensation can be soothing to the nervous system. The picking may therefore be a response to feelings of anxiety, depression, nervousness or fear. These are all common emotions in the aging adult, compounded by the deterioration of other mental faculties such as memory.

What can I do to help?

Behavioral therapy has been found to be the most effective method for the treatment of BFRBs, however, its application is not always appropriate with the elderly, particularly when there is decreasing internal motivation and immediate gratification becomes more prominent. One of the fundamental steps in behavioral therapy is to gain awareness of the picking patterns in order to identify the triggering environments and precipitating factors. It may be that you as the carer would need to gain that awareness on your loved one’s behalf. You can do this by keeping a picking record detailing the times of day, the environments and their mood at the time of picking. It is possible you may want to speak gently to your parent about how they are feeling at the time of picking. Try to understand why the person may be anxious, afraid or sad. Once you have identified a pattern for the picking, you may be able to be proactive in preventing the picking. Here are some ways you can create a competing response to these triggering stimuli:

Although there is currently no known “cure” for excoriation disorder, the behavior can be managed. There are also some medications such as inositol and N-acetyl cysteine that have been shown to decrease the urge to pick. However, you should always consult with the prescribing physician before administering any medication to prevent conflict in effects with any other medication your loved one may be taking. Finally, there has also been evidence that diet can affect the severity of urges, with an increase in urges reported with high sugar and high caffeine intakes. Excoriation disorder is not well known, even in the medical profession, so if you suspect your parent has this disorder, it is best to bring it up with your consulting doctor and voice your concerns.