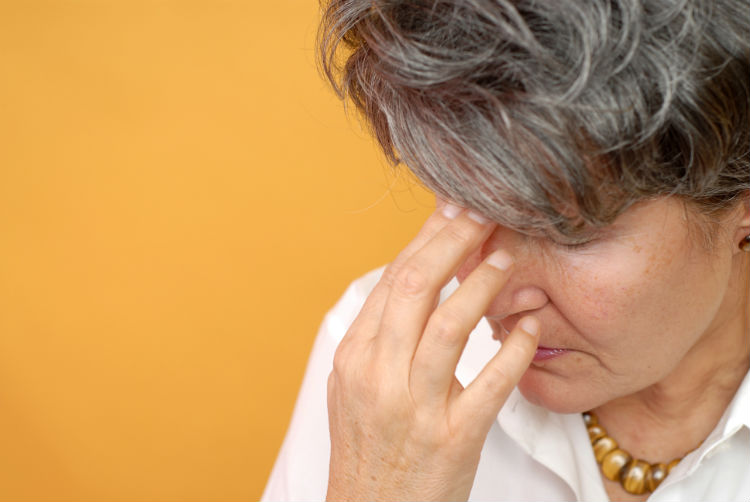 Denise Altman’s 81-year-old mother suffers from chronic depression, which often makes her sad and agitated. When her mom began acting confused during conversations over the phone and appearing glassy eyed in person, Altman and her sister assumed these were just symptoms of their mom’s underlying mental health issue. The confusion would last a few days and was often followed by a low-grade fever.

Finally, there was a breakthrough when their mother complained of painful urination during one of these odd spells. Altman took her mom to the doctor where she was diagnosed with a urinary tract infection (UTI). Unfortunately, the infection kept coming back, causing the sisters a great deal of concern.

Altman’s sister began charting their mother’s symptoms and noticed a distinct pattern. Each time she suffered the confusion and fever, a UTI diagnosis came just a few days later.

“It took us a while—several months actually—to determine that when our Mom got into these states, it wasn’t just the depression,” recalls Altman. “It never occurred to my sister and me that the symptoms could be due to a UTI.”

According to Amanda Smith, MD, medical director and director of clinical research at the Byrd Alzheimer’s Center and Research Institute at the University of South Florida, older adults often present different, even unusual, UTI symptoms. In fact, the signs of infection in older people are often largely behavioral, which can be very puzzling for family caregivers.

What Is a UTI?

A UTI is an infection of the urinary tract, most commonly the bladder. For most people, key symptoms of a UTI include the need to urinate frequently and/or urgently, a burning sensation while urinating, and urine with an unusual color or odor. Sometimes a small amount of blood in the urine is even visible. However, these symptoms are often missing in older adults or they are unable to articulate them. Instead, seniors may suffer from unexplained incontinence, fatigue, or sudden changes their behavior and mental status.

“Older people can get markedly confused, agitated or sleepy,” explains Dr. Smith. “Sometimes they can hallucinate or see things that aren’t there, like bugs crawling on the ceiling. They can also experience delusions (false beliefs) and become paranoid.”

What Causes a Urinary Tract Infection?

In younger people, urinary tract infections are sometimes related to frequent sexual activity, but in older folks, changes in personal hygiene are often a factor. This can occur due to cognitive decline or physical limitations caused by conditions like arthritis, COPD or a stroke. Functional limitations can make it difficult for a senior to manage incontinence care and keep themselves clean, especially after toileting.

Family caregivers play an important role in recognizing new health issues in their loved ones. Dr. Smith suggests being on the lookout for the following classic and more unusual UTI symptoms.

The main effect of a UTI on a senior’s mental health is delirium. The U.S. Library of Medicine defines delirium as a mental state in which a person is confused, disoriented and unable to think or remember clearly. The following symptoms of delirium are commonly seen in older adults with UTIs. However, they may not all be present, and they may fluctuate over time.

Keep in mind that it can be difficult to notice UTI mental symptoms in seniors living with Alzheimer’s disease or other forms of dementia and individuals with existing mental health issues. The Cleveland Clinic points out that confusion alone does not necessarily indicate the presence of a UTI, but medical attention is still necessary because it could indicate other new or worsening health issues.

Seeking Treatment for a UTI

Urinary tract infections sometimes resolve on their own, but they can easily worsen due to a senior’s compromised immune function. When left untreated, UTIs can lead to chronic incontinence. The infection can also spread to the upper urinary tract and cause serious kidney damage. When that happens, patients often experience a fever and severe pain. The infection could spread even further to the bloodstream and cause sepsis, which can be fatal. Therefore, timely testing and treatment with antibiotics is crucial.

Once Altman recognized the behavioral symptoms that often accompanied her mother’s UTIs, she and her sister were more vigilant about assisting with personal hygiene and pursuing tests and prescriptions to clear up the infection. Most family caregivers are not aware of the unique symptoms of UTIs in seniors, but this information is vital for speedy diagnosis, treatment and recovery.

“It’s nice to have that early warning,” Altman notes. “It’s well worth sending in a urine sample when the symptoms first become apparent. Early treatment saves our mom days of feeling bad and being more confused than usual.”

Many caregivers keep home test strips for UTIs (available at most drugstores) on hand in case their loved ones suddenly begin showing physical or behavioral symptoms. Keep in mind, though, that over-the-counter tests are not completely reliable. A urine culture performed by a laboratory is often necessary to determine the strain of bacteria that is causing the infection and the appropriate antibiotic that must be prescribed to treat it. Doctors may prescribe regular preventative doses of broad-spectrum antibiotics for seniors with recurrent UTIs.

Sources: Delirium (https://medlineplus.gov/delirium.html); 6 Things You Should Know about UTIs in Older Adults (https://health.clevelandclinic.org/6-things-you-should-know-about-utis-in-older-adults/)