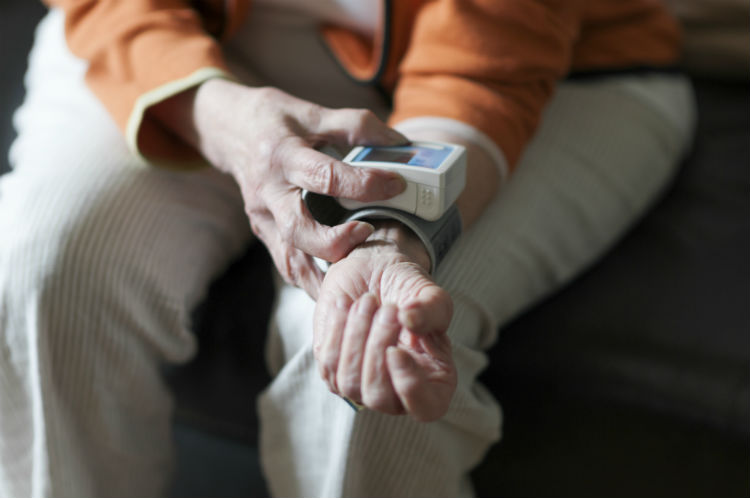 My Emergency Room Visit on March 5

Back in March, I had an enjoyable visit with a treasured friend from out of town. I was feeling fine when I went to bed, but I had trouble falling asleep, so I went downstairs and stretched out on the living room couch.

This change of scenery usually works for me, but not this time. Eventually, I decided to go back upstairs to the bedroom. As I slid off the couch and attempted to stand, I collapsed onto the floor. My leg muscles were completely useless.

It took a long time to pull my body along using just my arms to get to the phone on the table by the couch to call 911. (OK, I know. "You should be using a wearable medical alert device!" For the past six months, I've been gathering lots of information on these systems. This is the sort of thing I do well and therefore to excess. What I have trouble doing is making a decision.)

I spent several hours in the emergency room at nearby Sibley Hospital and was given all sorts of tests, which I passed with flying colors. The doctors finally decided to release me and let my housemate drive me home, even though my legs still weren't functioning.

I suspected a cause. I’d experienced several similar incidents—though not so disabling—earlier in the week. I was already wondering after these incidents if they were related to my recent experiments with an over-the-counter sleep aid I found at Trader Joe's. Those pills combined small amounts of 5-HTP, melatonin and L-theanine.

I know, you’re probably wondering, "Why the hell are you taking more sleeping aids when–as you claim–the 5-HTP has been taking care of your insomnia?" The answer is the same one that explains many odd decisions I’ve made in my life. "Anything worth doing is worth overdoing.”

I finally figured out that adding the Trader Joe’s sleeping aid to my regular 5-HTP regimen resulted in my overdosing on serotonin boosters. (Yes, I often get around to recognizing my insanities. Of course, sometimes it takes 35 years… like it did with alcohol. I really shouldn’t joke about my addictive tendencies. They’re weaknesses that have threatened my life and jeopardized the lived of others on more than one occasion.)

My Decision to Stop Taking 5-HTP

Prior to this hospital visit, I’d already been thinking about ditching the 5-HTP. My aging brain was tiring of the incessant blood pressure monitoring, and it was annoying splitting those pills into halves and quarters, trying to get the doses JUST right. The regimen was wearing me out.

Jacking up the serotonin with new sleeping aids was also increasing my risk of falling, which is probably the biggest threat to my health and well-being these days.

So, I finally stopped taking 5-HTP. Within a day or two of stopping 5-HTP, constipation came roaring back big time. I also saw signs that insomnia was beginning to make a comeback. Then, a much more serious problem took center stage.

It's been almost two months since I stopped taking 5-HTP. Although I'm far from happy with the return of constipation and occasional insomnia, it was time to give up on 5-HTP. I’m discovering other ways of dealing with both of those conditions in ways that don’t involve pills.

As for the decision to junk the blood pressure pills, it's become increasingly clear to me that the doctors who insisted I should get back on those meds as soon as possible were wrong. I still monitor my BP since I occasionally I get systolic (upper number) spikes above 180 mm Hg. When those spikes occur, I can use a small amount of the nifedipine Dr. BP prescribed to quickly bring the numbers back down.

But those spikes, I’m happy to say, are increasingly rare.

Here are my readings from yesterday:

These numbers suggest I was correct when I argued that I did not have underlying hypertension.

When I signed up with my new internist, he gave me a complete physical and found nothing of concern. The same positive results emerged from all the tests conducted at Sibley Hospital during my March visit.

I had an echocardiogram a year ago, and my new internist suggested I get another. Neither of them showed any problems. It certainly doesn't look as if my efforts to take a role in my own medical care have been damaging in any way. And the echocardiogram results confirm other evidence in my health history that I do not suffer from heart disease.

With the exception of Dr. BP, everyone else simply looked at the BP numbers and paid little or no attention to the quality of life issues I raised. They rejected my own conclusions based on my extensive BP monitoring at home. I didn’t have underlying hypertension… only the temporary spikes.

I don't think it's just a coincidence that Dr. BP was the outlier. He usually listened to my concerns, discussed them with me, and then worked with me to find solutions. It can be difficult to find a physician who takes the time to do these things nowadays.

In this instance, he was the only one who seemed to understand the quality of life benefits I was getting from 5-HTP. He then developed the strategy that permitted me to continue using the supplement and to use nifedipine as needed to bring down unusually high blood pressure spikes.

I asked Dr. BP about the new suggestion that, for those of us over age 80 who had no signs of heart disease, discontinuing blood pressure medication would be a viable option. He said he wouldn’t lose any sleep over it and suggested I also consider going back on Avapro, the blood pressure medicine that didn't seem to have as many side effects as others I've tried.

Ditching the BP medication, of course, provoked more negative comments than my decision to continue taking 5-HTP. Again, the opposition was based exclusively on the high BP readings taken in doctors' offices. But readings taken in a doctor’s office are notoriously unreliable, according to the American Society of Hypertension.

"Of all the procedures done in a doctor's office, measurement of blood pressure is usually the least well performed but has the most important implications for the care of the patient," said Norman M. Kaplan, MD, clinical professor of internal medicine at the University of Texas Southwestern Medical Center.

These in-office tests can be unreliable because blood pressure can be fluctuate due the presence of the medical professional measuring and recording it. The numbers also can differ from one arm to the other and from one minute to the next.

Guidelines set by the American Heart Association call for blood pressure to be measured at least five minutes after a patient arrives in the office while they are sitting in a chair with their arm supported. However, these recommendations are not always followed.

Unfortunately, this reliance on office blood pressure readings is just one example of the tendency in America to use "one-size-fits-all" medical care. Fortunately, there's a rapidly growing movement toward more personalized medical care, like what I've found with Dr. BP.