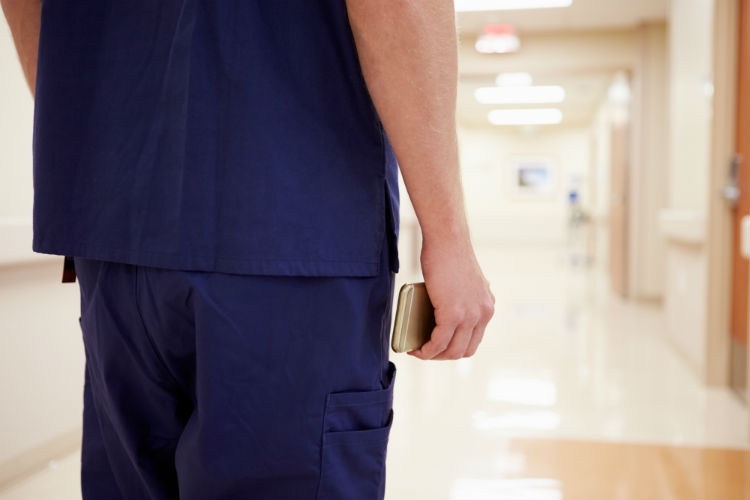 Advances in technology and social media platforms and applications have allowed us to remain connected with one another nearly anytime, anywhere. Caregivers and their loved ones have used these tools as a source of support, entertainment, communication, and much more. But, as with many great inventions, there is a downside to this proliferation of mobile devices and social media. Unfortunately, the law has not caught up with these new technological advances, and vulnerable demographics have fallen victim to those who use these tools without ethical considerations or respect for others’ rights. One of these increasingly victimized groups is elderly and ill individuals who are receiving long-term care services.

March 2016: “A nursing assistant was fired after sharing a photo on Snapchat of an elderly and incapacitated resident with his pants down and feces on his legs, shirt and left hand. The resident had extreme cognitive impairments due to dementia.”

February 2015: “While talking to a friend on FaceTime, the live video chatting service from Apple, a nurse pointed the camera at a resident. At the time of the incident, an aide was washing the resident in bed following an incontinence episode. The aide said the nurse placed the cell phone in the resident's face and demanded that he/she say hi on camera to the person with whom the nurse had been talking.”

January 2016: “A nursing assistant admitted to taking video of a 93-year-old woman with Alzheimer’s disease sitting on her bed in a bra with no underwear or pants. She shared the video on Snapchat with friends.”

July 2015: “Two nurse’s aides face charges of elder abuse for posting humiliating videos of residents on social media. According to the Lowell Sun newspaper, one video shows an elderly resident sitting on a commode while dressed and being asked about her sex life and if she smoked marijuana. Another shows the same resident sleeping when one of the aides yells in her ear, waking her up.”

September 2015: “Three personal care assistants were fired after an employee took a photo of a resident on the toilet and posted it on Snapchat.”

All of these are actual, reported cases of social media abuse in American nursing homes. In December of 2015 ProPublica released "Nursing Home Workers Share Explicit Photos of Residents on Snapchat," a report aimed at raising awareness of this new type of abuse in long-term care settings. The report revealed that, since 2012, they have uncovered 35 cases of social media abuse through news stories, criminal charges and government inspection reports. Nine additional cases have been reported. You can find more detailed information on each of these incidents here.

Unfortunately, the legal system has not advanced as quickly as our technology. For example, in the March 2016 incident of the resident photographed covered in feces, the employee responsible was not disciplined or charged for her actions. This incident took place at Hubbard Care Center in Hubbard, Iowa. Iowa’s sexual exploitation law states that, in order to fall under “sexual exploitation,” photos posted online must include “restricted content” such as genitals. “Restricted content” was not visible in the photo that she shared. However, changes may be on the horizon.

Since the release of ProPublica’s report, Sen. Joe Donnelly, D-Ind., has asked the Senate Aging Committee to investigate the issue of social media abuse in nursing homes, Sen. Tom Carper, D-Del., has asked federal privacy regulators what was being done to stop this heinous behavior, and Sen. Charles Grassley, R-Iowa, has asked the Justice Department to identify the number of criminal and civil cases of nursing home social media abuse they have handled in the last five years. While many of the known cases have resulted in criminal charges, these were primarily handled by state or local prosecutors, not the federal government. These Senators have taken the initiative to obtain further documentation of the problem with the intention of identifying the full scope of this problem and proposing solutions to prevent future issues.

Many of the known incidents listed in the ProPublica report involved the usage of Snapchat, a mobile social media application where photos a video can be sent to others, they appear for recipients for a few moments, and then they disappear. Facebook and Instagram were also common platforms used to disseminate abusive content. This prompted Sen. Grassley, Chairman of the United States Senate Committee on the Judiciary, to send a letter to social media companies and federal agencies earlier this year. In his letter he asked what was being done to stop the abuse. “Making sure older citizens are afforded dignity and treated with respect is a measure of a good and decent society,” Grassley says. “I’m working to get a better idea how pervasive elder exploitation is so that we can solve it.” Facebook and Snapchat replied that they are doing what they can to deal with abusive photos and videos that violate their terms of service.

Sometimes “Abuse” Can Be Well-Intentioned

We have all seen moving viral videos of seniors dancing, singing, learning to use technology, giving sage advice, and more on our social media feeds and in the news. There is absolutely nothing wrong with society wanting to appreciate and learn from our elders, but recording another person, regardless of their age, can infringe on their right to privacy, even if the resulting media is not demeaning, abusive, or explicit in nature.

The ethics of photographing, filming and recording others can be very complex, and the legalities vary by location and the medium used. In the simplest terms, the individual(s) being recorded must first consent to being recorded and then give permission for the product to be distributed. Even the most heartwarming video of an elderly woman excitedly opening a birthday present may constitute a serious violation of privacy and even the Health Insurance Portability and Accountability Act (HIPAA) if proper permissions were not obtained. This can present a serious challenge, however, since many residents in nursing homes and memory care facilities suffer from varying levels of cognitive impairment and are unable to consent to such activities.

Preventing Exploitation of the Elderly

Many facilities have their own rules and policies for employees and staff when it comes to cell phone and social media use, but these can be difficult, if not impossible, to enforce. In instances like the aforementioned in Iowa, it becomes the facility’s responsibility to set firm and specific rules, take precautionary measures, monitor their employees, and take swift disciplinary and/or corrective actions against wrongdoers. Regulatory agencies also play a significant part in policy changes as well. Furthermore, caregivers and family members must be diligent when selecting a facility and care providers for a loved one and remain vigilant and attentive when it comes to their care and treatment. Any decent facility should enable family to participate in ensuring they are providing high-quality care and respect for their residents.

The pointers below will help family members select a long-term care provider or facility for their loved one and prevent them from becoming a victim of social media abuse. By taking the time to ask questions and investigate, you may save your loved one from unnecessary harm and embarrassment.