When Dirk Biotto's grandmother began having problems preparing meals in her home kitchen, the young industrial decided to put the lessons he'd learned as a student at the University of the Arts in Berlin to good use, re-tooling the traditional kitchen layout to better suit someone who is dealing with the common mobility issues associated with aging.

"I discovered every time I visited my grandmother that she had more and more trouble working in the kitchen, because of her increasing age," says Biotto. "So I asked myself how a kitchen could be designed and changed in a way to improve cooking and make it easier."

Background research revealed the existence of various implements meant to help elders with cooking. But there appeared to be no all-encompassing design product available to assist older adults who still want to keep cooking, despite the various disabilities associated with advancing age.

For instance, how can a senior with severe arthritis in their left hand wield a two-handed grater? What about an elder whose arms aren't as strong as they used to be—how do they lift a pot full of potatoes from the counter into the sink and fill it with water?

For the elderly in the kitchen, "most problems evolve when a lot of strength or good fine motor skills are needed to fulfill different steps of tasks," says Biotto.

ChopChop, a universally-designed kitchen with a wealth of special features for seniors is Biotto's answer to these common cooking dilemmas. Using the concept of a wooden workbench—"a kitchen should be a place in which work can be done"—for aesthetic inspiration, Biotto examined every detail of the meal preparation process to create his elder-friendly design:

The right height: Counter height may not a problem for able-bodied adults, but people tend to shrink as they age due to osteoporosis, loss of cartilage and the development of hyperkyphosis (the curving of the spine that leads to a "dowager's hump"). ChopChop's counter top can be moved up and down to accommodate the height of the person using it. 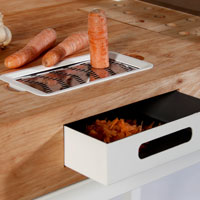 A surface you can work with: Unlike typical laminate or epoxy surfaces, Biotto included an alder wood counter top that allows hot pots and pans to be placed directly on it, without fear of damage. For seniors with shaky hands due to Parkinson's or other neurological disorders, a series of strategically-placed bolts can be used to hold food items in place for more precise chopping. The wood surface is much like a cutting board and is meant to be cut on directly, so nicks from errant incisions are a non-issue.

Built-in gadgets: A grater with interchangeable plates and a drawer to catch the grated materials is embedded into the counter top, making one-handed grating a possibility for those with limited dexterity. A milled slot cradles bread for slicing and sandwich making. There's even a vise-like feature that pinches jars and cans until they are steady enough to be opened with ease. 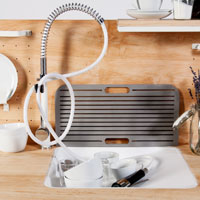 An easy-to-use sink: Sarcopenia—the gradual loss of muscle mass that begins in adults as young as 30—rapidly begins to quicken once a person reaches their mid-70s. Lifting pots full of water and food products in an out of the sink can become a challenging, even dangerous, task for older adults. ChopChop's sink has an extendable hose and a sloped side meant to make filling and transporting pots from sink to stove less taxing.

Seen and secure: Rooting around in various cupboards and drawers for the right kitchen implements can be frustrating for a senior with mobility issues. So Biotto created a special backplate with bars and bolts to hold utensils securely at eye-level and within easy reach. Along with the vise device, the backplate is one of Biotto's favorite elements of ChopChop. "Personally, for me, it's important that function (especially in terms of the kitchen) plays an equal role as design. You see, the most beautiful kitchen is more or less useless when you are not able or allowed to cook in it." 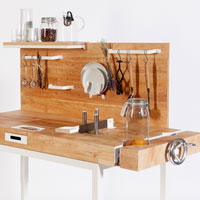 While the ChopChop concept is still in the prototype phase, Biotto plans to continue improving on the design and hopefully make it more widely available in the near future.

What other elements would you suggest adding to make cooking simpler for seniors?

Home Modification Product
Be the first to comment
Related Articles