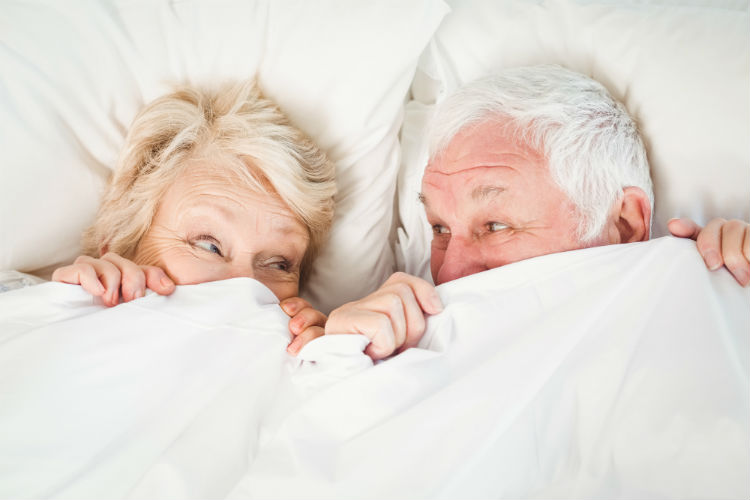 You see an older couple walking hand-in-hand down the street, staring into each other's eyes and grinning. Their hands are clasped. "Ah, cute," you think. Then they giggle and kiss. Yikes! Aren't they kind of old for that?

Our society has marginalized people over fifty when it comes to love and sex. The "ick" factor is natural, when one thinks of his or her parents. Who wants to think they ever did that? Of course the fact that you and your siblings exist is a clue, but still, it's just something most of us don't care to think about.

But parents age. Some are widowed or divorced and they remarry. Still, we'd rather not know too much information about their intimate life.

And that, of course, is the issue. With people living longer in assisted living and nursing homes, more romances among elders are blossoming. Just what does the home allow these folks to do? How intimate can they get without getting into trouble with administration and families? What are their rights as adults?

This could be a nursing home or assisted living administrator's ongoing nightmare. On one hand, we want elders to have the best quality of life they can have, whether they live at home, in assisted living or a nursing home. Often – hopefully – that includes friends. And some of those friends may be of the opposite sex.

Many of these elders choose an assisted living center so they can be in comfortable surroundings with services provided and lots of social activity. The family thinks this is terrific. But when Grandpa announces that he and his friend Millie are in love and want to get married, the response is generally one of stunned silence. Can't you just be friends? You know – play cards and go to the movies together? What do you mean you want to get married?

A tougher situation is when there is uncertainty about the elder's mental stability. A friend of mine tells me his dad, who has Alzheimer's disease, used to go into a woman's room at the nursing home, and take off his clothes, clearly intending to get into bed with the woman. He's not sure that the man had any other intentions, but no one at the home wanted to find out. And what about the woman? Was she a willing participant? Did she want him there? And if she did, is she competent to decide?

The sticky question is this: When do people lose their right to chose what they do sexually? Yes, with dementia there are times when sexual "acting out" is evident in public and the person has to be distracted and sometimes removed from the situation. It can be self-stimulation or undressing in public. But what about love? What about consensual sex?

In November 2007, retired Supreme Court Justice Sandra Day O'Connor bravely, and with great love, gave her public blessing to a romance between her husband, whose Alzheimer's no longer allowed him to recognize her, and a woman in the nursing home where they both lived.

Of course, sex wasn't mentioned in the press coverage, and it's none of our business if this was part of the new romance. But what Justice O'Connor has gone through is not unusual with spouses who have mates in advanced stages of dementia. If two consenting people, each with dementia, fall in love, where do staff step in and decide what is proper and what is not? When does the hospital administrator start to worry that one of the families will sue because they will claim their parent was an unwilling partner, or that the parent is not in safe surroundings?

These same questions have been asked about mentally handicapped people for decades. Should they marry? Can they make such a decision when they are clearly not mentally capable of living a "normal" life, without assistance? Yet there are many happy couples living, with the help of social services, all over the country. Of course, they are generally younger, so it's easier for most people to accept.

What about Grandpa and Millie? Should they be allowed to marry? Should they live together as man and wife? Who decides whether both people in the relationship are cognitively able to consent to sex? Where do the rights of people with dementia end, when it comes to love? And what about the opinion of the families?

This will become one of the most widely debated topics in elder care, as elders continue to spend more years in communal settings. I'm attending the Northern Plains Conference on Aging and Disability this fall. One of the discussions is about "elders and sexuality." I've never before encountered this in such a public forum.

Nurses and Certified Nursing Assistants have traditionally been trained how to handle the occasional randy elderly man who makes a pass as the CNA who is bathing him. That is nothing new. What is new is much more frequent and visible "elder love" in communal settings. Also, what is new is the recognition that elders have rights, and one of those rights just might be sexual expression.

Along with the efforts being made by forward-looking people to raise issues concerning an elder's right to be treated as an individual, with dignity and respect, come new questions. One of these questions is how do communal facilities protect an elder's right to love and sexuality, without harming an unwilling partner or others who may witness the situation. Discussions in forums such as the one I will attend, as well as discussions among nursing home administrators, and even attorneys, will be leading to some new guidelines, I am sure.

Yet, for each unique situation, there will always be questions. Are these elders mentally capable of consent? Where do the rights of individuals stop, and the "comfort level" of the surrounding people (and families) take over? Expect these discussions to take time and decisions to be ever fluctuating, as these will not be easy lines to draw.