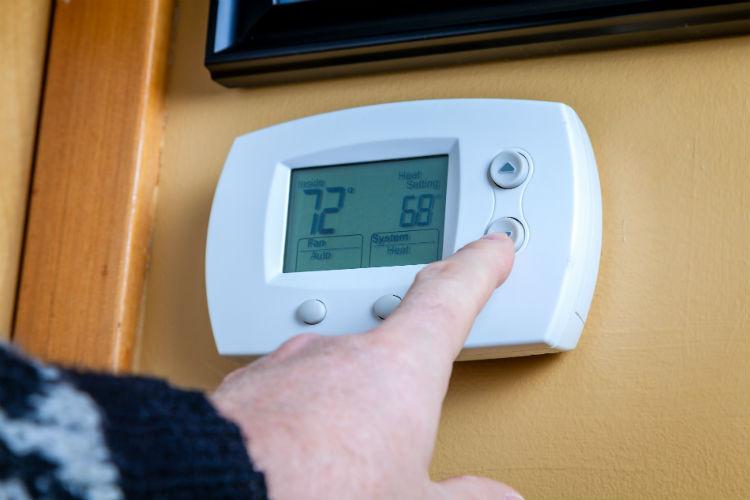 My husband Charlie and I live in New Hampshire. I always retire for the night around 10 or 11, but because he sleeps in until between 1 and 3 each afternoon, Charlie turns in much later.

The last thing I tell him when I go to bed is, “Do not touch the thermostat.” Unfortunately, he sometimes forgets that he is not to touch it and sets out to “close down the house” before he retires. Old habits die hard, especially for dementia patients.

I often wake up either overheated or shivering if Charlie has fiddled with the thermostat overnight. I can recall a particular incident back in 2015 during one of New England’s snowiest, coldest winters in recorded history. I awoke in the morning with my nose and toes freezing. When I got up and checked the indoor/outdoor thermometer, I learned it was minus 18 degrees outside and only 55 degrees in the house. The wind was howling, making the chill factor outdoors around minus 30 degrees.

I immediately looked at the furnace thermostat and discovered that Charlie had not only turned it down to 58 degrees but had also turned on the air conditioning fan. Needless to say, I lost my cool in more ways than one.

I went to his room and made him get out of bed at 8 a.m. so that he could appreciate what it felt like to exist in a house that cold. He had no recollection of touching the thermostat. So, we just laughed and agreed, “The mouse must have done it!” That’s my usual reaction when things mysteriously happen around here. Rather than laying the blame on Charlie, I try to lighten up the mood. It helps me move past feeling cross with him.

We were lucky the water pipes didn’t freeze that day. The house eventually reached a comfortable temperature, but the dilemma remained: how do I prevent this from happening again? The only solution I could come up with was to place a large sign around the thermostat with big red letters saying, “DO NOT TOUCH!” But given his mental state, this didn’t mean much to Charlie. The alternative is for me to start keeping his crazy hours and tucking him in before I go to bed. I can tell you that is not going to happen.

I know I’m not the only dementia caregiver struggling to maintain control of the thermostat. I am also aware, though, that Charlie’s condition will continue to decline. This, like many of his other bothersome dementia behaviors, will eventually fade away. It’s anyone’s guess what new quirks will arise or what other kinds of trouble he will get himself into, but I try to focus on tackling each day at a time.

The television has been another ongoing issue for us. The other night, he tried to change the TV channel after I went to bed, resulting in a complete mess of our cable and Netflix systems. It took me some time (and much frustration) to get them working again.

I want to keep him safe and comfortable, but I hesitate to interfere with his deeply ingrained habits and behaviors. Thankfully, he has not tried tinkering with the car yet. That would be the last straw for me.

As it is, I am thinking about advertising him on eBay. Any takers?