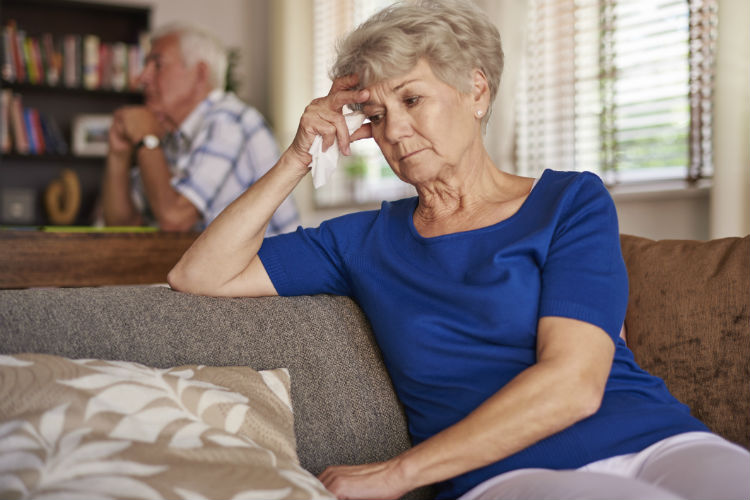 There’s nothing easy about taking care of someone with dementia. This condition and the special care it requires significantly change the relationships between people. Spousal caregivers can feel especially lost throughout this journey as they struggle to provide care and make difficult decisions, often without the input or approval of their partner in life. It can be a lonely and frustrating road for many reasons, but one of the most overlooked challenges facing spousal caregivers is how to deal with a forever altered romantic relationship.

Despite these losses, one aspect that remains intact for a couple is the need for intimacy, both physical and emotional. According to Robin Dessel, sexual rights educator and former director of Alzheimer’s care and low vision care at the Hebrew Home at Riverdale in New York, the older a person gets, the more they need human affection. “There’s no less desire or need for camaraderie, intimacy and touch as we age,” she explains. “In fact, loneliness is one of the foremost causes of depression in the elderly.”

Following a dementia diagnosis, caregivers and their loved ones are left trying to figure out how to satisfy their desires for connection and affection in a relationship that is constantly being altered by progressive cognitive decline and often physical decline as well.

Dementia can have a wide-ranging impact on a patient’s views, reactions and behavior when it comes to sex and intimacy. Their inhibitions may become lowered, causing them to say or do things that are uncharacteristically crude or vulgar. It can be very shocking and offensive to friends and family when a loved one with dementia stops adhering to society’s expectations regarding good manners and appropriate sexual behavior.

It’s one thing when a spouse with dementia acts out sexually around their partner, but they may also make unwanted advances or lewd comments to other family members, their professional caregivers and even strangers. It can be very challenging to bring a loved one with dementia on outings once they lose their filter, especially since the public is generally unaware of the various ways dementia can affect a person’s behavior and impulse control.

Some may think that a patient’s hypersexuality wouldn’t necessarily be problematic for their spouse, but it is a serious and conflicting issue for many dementia caregivers, especially when other complex behavioral and cognitive changes are present. Increased sexual desire tends to be a temporary phase that patients go through, but in some cases it is so severe that caregivers may need to seek help from a physician to calm these urges. Some patients even react with anger or violence when their advances are refused. Although non-pharmacological interventions are the first-line treatment for inappropriate sexual behavior in seniors with dementia, antidepressants, antipsychotics and anti-anxiety drugs are often prescribed to help minimize agitation, sexual desire and behavioral disinhibition.

For many adults, sex and other types of physical intimacy are important components of a healthy romantic relationship. However, spousal caregivers may be uncomfortable with the thought of being intimate with their loved ones when it is clear they are not fully in touch with reality.

At some point during the progression of the disease, the nature of the spousal relationship changes and both partners are no longer equals. A patient’s limited understanding of time and impaired thought processes make it difficult and eventually impossible for them to make informed decisions, such as agreeing to medical treatments, managing their own finances and even consenting to sexual activity. Furthermore, confusion and memory loss can contribute to emotional distance (and put a damper on physical affection) as both partners lose the ability to share their hopes, fears, plans and memories with one another.

Dementia progresses differently in every patient, but for some the condition so affects their behavior and personality that they seem to become an entirely different person. A previously gentle, devoted and considerate significant other may become spiteful, demanding and abusive. This can have a damaging impact on the foundation of any relationship, especially a romantic one. Intimacy of any kind may be unfeasible or undesirable once dementia transforms a spouse into a stranger.

Memory loss may also cause a person to have difficulty differentiating between the past and present. With Alzheimer’s in particular, short-term memories are the first to go. This means that an elder may still think of themselves and their partner as being young. They might not be able to identify themselves in the mirror or recognize their significant other. This often results in extreme anxiety and confusion and can make both physical and emotional intimacy nearly impossible. In a dementia patient’s mind, their spouse is a stranger living in their house and sleeping in their bed with them.

Sometimes lack of recognition can be so severe that a patient believes their spouse has been replaced by an “imposter.” This specific delusion is known as Capgras syndrome. It is common in seniors with Lewy Body dementia and it can be a traumatic symptom for both patients and their caregivers to experience. Separate bedrooms or even placement in a long-term care facility may be the only options for handling serious cases of Capgras.

Read: Capgras Syndrome: How to Cope with a Loved One’s Delusions

When a Partner Doesn’t Remember a Life-Long Relationship

A person with dementia may even forget the relationship they shared with their spouse. It’s not unheard of for a memory-impaired individual living in a long-term care facility to seek solace in the arms of another resident, even though they are still married or in a relationship. According to Drew, it’s a more common occurrence than one would like to think.

Perhaps the most well-known example of this is when former Supreme Court Justice Sandra Day O’Connor learned that her Alzheimer’s-stricken husband had formed an intimate relationship with a female resident in his memory care facility. Surprisingly, she gave the couple her blessing.

Of course, this selfless act is easier said than done. How can a spousal caregiver cope when their partner appears to turn their back on the love they shared for years for a new relationship with someone they just met?

Dessel urges family members to avoid thinking of the situation as a betrayal. It may take months or years to adopt this understanding perspective. The key is to approach the issue with an open, loving mind and a thorough understanding of how dementia can significantly alter a person’s sense of reality.

A loved one may not remember their significant other or their relationship, so they may seek out another source of love and reassurance. Pleasure and comfort are two things that people with dementia desperately need but often lack. All they know is how their new beau makes them feel, and this connection likely helps them feel grounded despite the overwhelming disorientation and confusion they experience on a daily basis.

“It isn’t an act of malice,” Dessel says of these relationships. “For the people in the relationship, it’s happening in real time. They are being monogamous and bringing one another pleasure and comfort.”

That’s why, as challenging as it is, caregivers and other family members should view acceptance of such an unconventional pairing as an act of love. “Sometimes, loving someone else means not being selfish with your love,” says Dessel. “If I had a loved one stuck in the throes of that reality, I would want to know that there was something that brought them happiness.”

Sources of Support for Dementia Caregivers

One of the most dangerous feelings that caregivers experience throughout their journey is that they are alone in their struggles. This misconception adds to the pain and isolation many feel when dealing with difficult issues, such as the one surrounding dementia, sex and the uncertain future of romantic relationships.

As a caregiver, you’re never alone, especially on AgingCare’s Caregiver Forum. Here is a sampling of questions about intimacy and elder care that real-life caregivers have asked on the forum:

Drew points out that every relationship and caregiving situation is unique and there are no “cookie-cutter answers.” Nothing will make the process totally pain free for the caregiver or the person suffering from dementia. There are, however, common themes, tips and insights that can be shared between caregivers with similar experiences.

When grieving the end of an intimate relationship with a spouse who has dementia, Drew says it’s essential to understand that your feelings are both normal and natural. The best way to handle them is to be gentle with yourself and find safe havens where you can share your emotions and discuss them with understanding individuals and no risk of judgement. This might be with a counselor or therapist, a close friend or family member, or an in-person or online support group.