Jessica, Onno, Jurrien, Jordi, Max and Denise fit the mold of most college students, except for one crucial difference. Rather than living with their fellow twenty-somethings in miniscule dorm rooms, these six students reside in an unusual place: the Humanitas retirement home in Deventer, Netherlands.

Even more surprising than a handful of collegians living happily amongst the aged is the fact that their aging neighbors are just as enamored with the arrangement as they are.

What brought these vastly different generations together under one roof? One woman's dream to infuse traditional long term care with a bit of "gezellig" (heh-SELL-ick). (Gezellig doesn't have a true English equivalent; its meaning lies somewhere in a mash-up of quaint, home-like and cozy. Gezellig is the feeling you get when you reunite with an old friend after a long period of separation.)

Indeed, the college students and the retirees act as though they are friends from a past life, reunited in an unconventional way.

As Humanitas' Managing Director, Gea Sijkpes saw an opportunity to provide local college students with affordable housing—none of the student residents pay rent—while enhancing the daily lives of the 160 aging adults who also occupy the building.

In exchange for free living space, the students have to keep the noise to a minimum and spend at least 30 hours each month helping their fellow residents. "Their assignment is to ‘be a good neighbor,'" says Sijkpes, who now gets letters and messages from hundreds of students who also want to live at Humanitas. Somewhat surprisingly, many of the older residents were on board with the concept of young students living among them from the beginning, according to Sijkpes. Even so, each college-age candidate is thoroughly vetted and must undergo a temporary trial period before being allowed to officially move in.

Sijkpes is pleased with the result of the program, and says the addition of a few young adults has helped make Humanitas "The warmest and nicest nursing home of Deventer."

Students and seniors: a harmonious match

Recognizing the benefits of intergenerational living programs, a handful of long term care communities in the Netherlands and France have adopted similar initiatives. The model has also made it stateside, to the Judson Retirement Communities in Cleveland, Ohio.

When the Cleveland Institute of Music (CIM) began to have trouble finding housing for its students, "a seed was planted for a new experiment in intergenerational housing," says Cynthia H. Dunn, President and CEO of Judson.

As with Humanitas, the students living in Judson don't have to pay rent. They earn their housing by performing for their fellow residents, and coordinating the community's cultural programming efforts.

It's an arrangement that bestows benefits on both generations. "Residents have said the students add a youthful energy to the atmosphere," Dunn says. And as for the younger musicians? "The music students benefit from having a mature, knowledgeable and attentive audience of music lovers. The residents really care about the students and offer supportive feedback about their performances. Many of the students say they feel that the residents are an extension of their own family."

So powerful is this feeling of family that when Daniel Parvin, a graduate of the CIM masters program and an artist-in-residence at Judson, was having trouble finding a scholarship to help him continue his doctoral studies, his Judson "family" organized a letter writing campaign to the president of CIM. Their efforts eventually enabled Parvin to access the financial assistance he needed to stay in school. 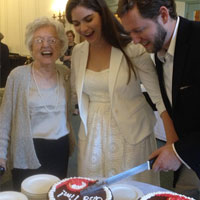 Another student, Caitlin Lynch, developed such a deep connection with one of the older women in the community that she asked the woman to be the flower girl in her wedding.

Perhaps part of the reason these two age groups are so drawn to one another is the shared experience of loneliness. Young adults in college and older adults who're retired report some of the highest rates of loneliness and isolation. Bringing them together can alleviate some of these feelings and enable them forge relationships that help them thrive.

Intergenerational programs are catching on

Students from the Cleveland Institute of Art and Ursuline College have also been allowed to live in Judson communities, rent-free, in exchange for providing art therapy services and companionship to the older residents. 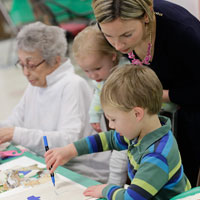 In addition to student residents, Dunn says Judson plays host to approximately 500 young adults of varying ages each month. Eighth graders from a nearby Montessori school come in on a regular basis to help the residents write down important stories from their lives and create autobiographies. Recently, a handful of Case Western Reserve University students collaborated with Judson residents to create a special automatic pill box monitor.

The concept of college students sharing a living space with older adults may seem a bit odd. But, the proof of the power of these programs lies in the undeniable gezellig that permeates the hallways where young and old share their lives, talents and experiences with each other.