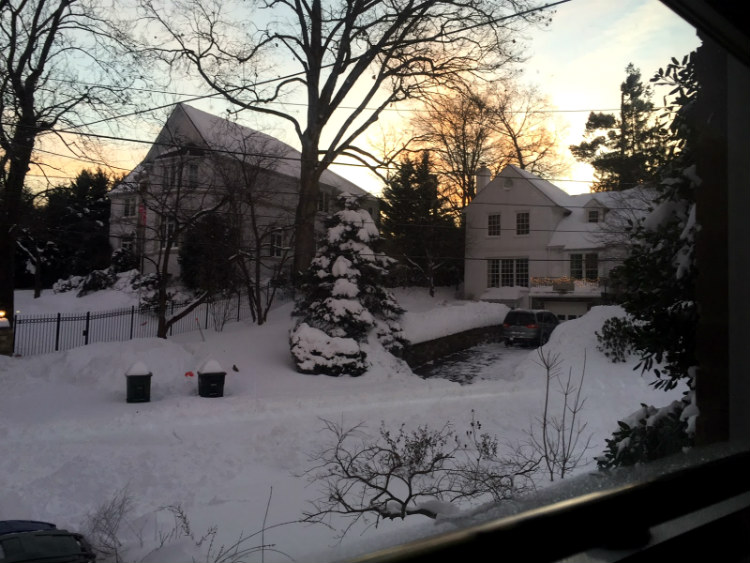 This morning I got up at 5:00 AM for a bathroom visit and my pills. Since I had slept well, I decided to stay up for one of my "joy of quiet" sessions.

I often use this early morning time for non-strenuous stretching exercises and mindful meditation.

I got a little carried away. When I finished and opened the bedroom curtains, I was surprised to see that dawn was breaking and took a photo.

The weekend blizzard, with its disruption of my normal routines, no doubt helped trigger this morning's extended period of contemplation and reflection. The enforced confinement gave me an opportunity to think about "where I am" these days.

The blizzard provided yet another reminder of how fortunate I am to be in my current living situation. Most of us elders want to "age in place," and, in my case, it's a place I've loved for over 50 years. But living alone later in life isn't easy, even under the best circumstances. Unusual disruptions like this blizzard make it almost impossible.

Loneliness is also a problem. I need more "alone time" than most people, but I can have panic attacks if I'm home alone and having one of my bad days on the health front.

So, what's my current living situation? For over three years now, Nimesh and Bhawana, a young Nepali couple, have been living with me. They've become my second family. "We" are expecting a baby girl in late March.

In preparation for that event, we've converted the space below my master bedroom—before a one-car garage—into a bedroom for the expectant parents. We also installed a mini kitchen, which makes this lower level of the house a separate living unit.

Sharing the house with a young couple and having their friends coming and going makes this arrangement especially enjoyable for me. Friends who live in senior residences tell me that they miss having young people around.

Last month, I had one of my regular checkups with my neurologist. He put me through the standard routine for Parkinson's patients. Afterward, he reported that for every item on the check list I was either doing the same or better than I was at my last visit about four months ago.

That report accords with my own feelings. Parkinson's is a progressive disease, there is no doubt about that. But what I have could also be labeled as "John Schappi's disease."

Parkinson's is very idiosyncratic. It proceeds one way with one person, and another way with someone else. As Michael J. Fox likes to say, we each get our own customized version of the disease, but unfortunately, none of them come with operating instructions. So far, my version of PD appears to be progressing relatively slowly.

To keep it that way, I need to do more in the way of exercise, particularly those exercises designed to help with balance.

Last year, I became increasingly convinced that I was headed for dementia if I wasn't there already. Two weeks ago, I underwent a memory test administered by a doctor affiliated with George Washington University Hospital. The doctor surprised me by saying she saw no signs of dementia now and little indication that it was in my near future.

It's hard for me to believe that what I perceive to be a huge decline in my short-term memory is just normal age-related deterioration. I also can't ignore the statistics indicating that 50-80% of people with Parkinson's end up with dementia.

But for now, I'll file away the NY Times article I had saved because it provided a virtual road map on how I could prepare for my final exit in the event of Alzheimer's.

Managing my blood pressure (BP) has become a major health concern for me. For several years, I've been having BP spikes that often bring the systolic (upper) number close to 200 and sometimes beyond. When blood pressure readings are taken in the offices of the various internists I've consulted, they look at the high number and react by prescribing blood pressure medication.

I tell them about the dozens of readings I've observed at home that clearly show BP spikes as the last dose of Parkinson's medication is wearing off and the next dose hasn't yet kicked in. Nonetheless, these doctors regularly believe that the single reading they take in the office is gospel.

I've written many blog posts about this controversy. And I will continue to do so. Next up will be a post about a Consumer Report study issued earlier this month concerning the newly-announced blood-pressure guidelines which the mainstream media has headlined as recommending that all of us bring our BP below 120/80.

Consumer Reports noted that the study underlying the new guidelines had limited applicability. The article explained that older patients were not included in the study and suggested adjusted guidelines for a particular group of seniors:

"Our medical experts consider 150/90 a reasonable goal for most people 60 to 75 who don’t have other risk factors."

In earlier blog posts, I've noted that keeping my BP readings under 150/90 is my goal. I also agree with the ever-growing group of doctors and scientists who believe that people in their 80s without coronary issues could consider ditching both their BP and cholesterol meds.

But doing that doesn't solve my blood pressure problems. To deal with the high spikes, I take frequent blood pressure readings so I can use nifedipine, a quick-acting medication for lowering BP in emergency situations.

As an additional complication, I can suddenly, and for no reason apparent to me, experience orthostatic hypotension (OT)—the rapid drop in systolic blood pressure to 100 or below. OT is particularly dangerous because it can cause dizziness and fainting. As a safeguard, I try to carry a pill bottle filled with salt at all times.

More to come on all this.

Most of my early morning contemplation, however, wasn't about Parkinson's or dementia or high blood pressure or death and dying. Instead, it concerned the things in my life that still give me pleasure.

Quite a few of those things are no longer possible, like travel to exotic places, trips to New York or London to see five plays in four days, bike trips to Mount Vernon or Great Falls, and, yes, wild and passionate sex.

During my memory test, the doctor asked me to describe what brings me the most pleasure these days. My answer came quickly: Good talks with close friends, particularly if there's a chance I can help a friend in need.