"Imagine being able to take a person with dementia out of their everyday environment and into a virtual world; a world where they can experience awe, wonder, giggles, amazement and joy."

Such a scenario may sound like an unattainable fantasy to a veteran dementia caregiver, but a group of Australian Alzheimer's activists have teamed up to turn this idea into a reality—by using virtual reality.

True to its name, "The Forest Project" is grounded in the idea that engaging with soothing outdoor environments can be extremely therapeutic for those with Alzheimer's and other forms of dementia.

In the Perc Walkley Dementia Learning Centre, a special room equipped with mood lighting, motion-sensing technology, and an interactive touch screen capable of being projected across a screen 10 meters long by two meters, cognitively-impaired players are immersed in life-size naturescapes that respond to their actions.

A wave of the hand can cause the wind to blow, the seasons to change, or the day to turn into night, and leaves fall from the trees in response to a simple hand clap, according to James Bonner, technical director at Opaque.

"We wanted to create virtual environments to engage and communicate with people living with dementia," says Tanya Petrovich, M.D., business development manager for AAV. "We want it to be special to them, to be fun and be an experience where they could connect and interact with an environment that inspired their interaction."

Aside from giving those affected by dementia a break from the oftentimes disorienting surroundings of typical indoor environments, the game also gives back one of the things dementia inevitably steals: control. "Particularly in the latter stages, it's very difficult for people with dementia to have a sense of control over their environment," Petrovich points out. By immersing players in a simple, relaxing environment in which they drive the action, the game aims to boost their self-esteem and confidence.

"The Forest Project" video game is not yet a reality; its creators have turned to crowd funding site, Pozible, to help raise the $82,000 necessary to build it. (View their campaign page.)

If the goal is reached, the project will be one of the first to use video game technology to help directly enrich the lives of men and women living with dementia. "This is a ground-breaking project, and the first step in a field with so much potential to explore," says Petrovich.

In addition to the forest scene, developers eventually plan to include a variety of environments, including beach and mountain vistas. 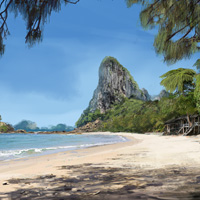 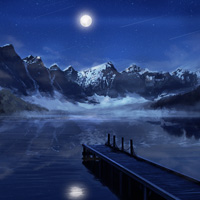 As soon as early 2015, a version of the game could be available to adults in senior living facilities and private homes, via a home video game console.

"The Forest Project" is not the first time AAV and Opaque have put their heads together to advance the care and quality of life for men and women living with dementia.

Prior to that, in a quest to help family and professional caregivers increase their understanding of their cognitively impaired charges, the two companies created the "Virtual Dementia Experience" (VDE), a program that employs the technology in the Perc Walkley Centre to demonstrate what the world looks, sounds and feels like for people with dementia.

"It's a multi-sensory experience where they see, hear and feel the world of a person living with dementia, including perceptual disturbances. The result is that the person playing has a visceral experience of dementia, rather than just an intellectual understanding of dementia," says Petrovich.

During one part of the game, caregiver-players walk down a hallway where striped wallpaper creates unnatural bulges on the wall, and little, ant-like specs skitter across the carpet. At the end of the hall, a nearby clock morphs into an unintelligible jumble of constantly moving lines, squiggles and dots.

"The VDE experience helps caregivers understand what may be going on for the person with dementia and that their behaviors and responses are consistent with the reality they are experiencing," says Petrovich.

Would you want to walk down the aforementioned hallway?

Over the course of the project's nine month research and development cycle, the team was presented with several challenges while trying to translate the altered reality of a person with dementia into a life-like experience for people of sound mind, according to Bonner.

Ultimately, AAV and Opaque were able to overcome these challenges through research, expert consultation and a few technological tweaks. The resulting VDE has helped dozens of family and professional caregivers better understand the challenges faced by people with dementia.

Here's an example of what it's like to participate in the simulation:

Both the VDE and "The Forest Project" hope to make the future of dementia care more effective and dignified. Many of the caregivers who experienced the VDE simulation were surprised by the difference between having intellectual knowledge of what a person with cognitive impairment is going through and actually experiencing it firsthand.

"My mother has dementia and I had no understanding of what she was going through. This explains so much about her behavior. I thought she was just being deliberately difficult," says one family caregiver. "I wish I had known this when she was first diagnosed. It would have made all of our lives so much easier—I would have been more compassionate."

A professional caregiver had this to say about the experience, "I have worked with people with dementia for a long time and know the signs and symptoms and the challenges of their behavior. After being through VDE, I now have a completely different understanding and really get the overwhelming world in which they can be living. This will change how I respond from now on—it's very moving."

What do you think—could video games have a positive impact on the future of dementia care? Would you participate in the VDE to gain a better understanding of what your loved one goes through on a daily basis?