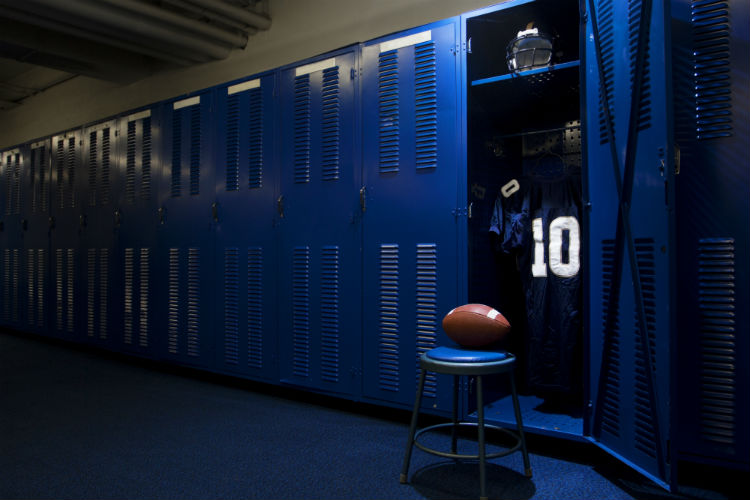 As a former football player and current football coach, Don Horton is no stranger to pain. Weakness, on the other hand, is not something he often experiences. So when an inexplicable sense of weakness overtook Don's left arm during one of his daily workouts, he knew something was off.

His first thought was that years of tussling for touchdowns had finally caught up with him; it must be nerve damage. An examination by the football team's doctor and a referral to a neurologist revealed a far more devastating diagnosis. After undergoing several appropriate and necessary tests, Don received a diagnosis of Parkinson's disease (PD).

Don was shocked. He was only 47 years old.

"I had never really known anyone with PD." Don says. "The denial I had was that it would not affect me. I felt invincible. I believed I would fight it like many do who battle cancer, but now I realize there is no ‘remission' like cancer. This is forever my future."

PD affects more than one million Americans, according to the Parkinson's Disease Foundation. Fewer than four percent of individuals who are diagnosed with the degenerative neurological condition are younger than 50.

Don told his wife, Maura, immediately, and they informed their two daughters, Libby and Hadley, soon after. "We were never going to let this change who we wanted to be as parents or as a family," Maura says. "We cope daily now by talking. We don't sugar coat anything and are brutally honest with each other and our children."

As upfront as Don was with his family about his diagnosis, he was not as eager to tell the other people in his social sphere—especially his colleagues and players. He did not want fear or pity to affect his relationships, and he was concerned that disclosing his diagnosis might end up costing him his job.

For seven years, the Hortons kept their knowledge of Don's condition to themselves. (Interestingly, this is also how long famed actor Michael J. Fox waited to tell the public about his PD diagnosis.)

When Don finally opened up to his friends, athletes and fellow coaches, things did inevitably change. "This has been very difficult for me," he admits. "Working in a career where I was respected and watching men (my peers) now looking at me with sorrow."

Some of Don's friends have stayed in touch, while others have distanced themselves. A few still call Maura (not Don) to inquire about how her husband is doing, because they do not want to ask him themselves. This is a common behavior within a circle of friends when there is a serious or terminal diagnosis.

"My wife often says when I was diagnosed that our life split into two segments," Don says. "On one side were those who understood and were going to be there regardless, and the other half were those who just don't understand."

Among those who do understand are Don's young athletes. While it's hard for them to see their coach struggle so much with everyday actions such as walking and talking, they've taken to using their mentor's own words to inspire Don to keep fighting. It warms the veteran coach's heart to see the impact he has had on his players' lives. "All those locker room pep talks I once gave to them come back to me from them. It gives us a great laugh and helps me get through some dark days," he says.

As for those in Don's life who do not (or will not try to) "get it," he refuses to allow their actions to affect his outlook. "I have Parkinson's. That is a true statement. Equally true is, I know football and what it takes to be successful. Being diagnosed didn't change my knowledge and passion for my career," Don says.

Dealing with PD while coaching football, being a loving husband, and setting a fatherly example for two girls under 12 is no easy feat; especially given the unpredictability of Don's disease. "I wouldn't be honest if I did not say that sometimes my children are saddened by my ability to not do things," he says. "We can't miss a beat. We have to acknowledge their moment and then figure out a new way or something I can do. It has put my wife and children in a position we did not have a plan for. We just deal with it head-on."

Don tries to maintain an optimistic outlook as he is forced to re-learn, practically on a daily basis, how to perform simple tasks such as talking, walking, standing and writing. "Being vulnerable in front of them [the family] is often difficult. When they see me struggle or fall, it hurts my soul in an unbelievable way," Don admits. "I always want to be strong for them, but then I realize this lesson is teaching them compassion and awareness that so many children don't have yet."

The disease has also forever changed the relationship that Don and Maura share. "I desperately miss his smile that has now been masked by PD, and his humor," Maura says. "But I see glimpses of it and treasure those glimpses as much as I can."

Maintaining close relationships with a spouse, and other family and close friends can be difficult for people with the disease for a number of reasons. In addition to general mobility issues, the neurological condition can cause hypomimia (paralysis of the muscles in the face, leading to an inability to smile, frown, etc.) and hypophonia (muffled speech that is low and hard to hear), which can affect an individual's ability to effectively communicate with their loved ones.

What is the most challenging aspect of dealing with this diabnosis at such a young age? "The loss of my freedom… Physically and mentally not being what or who I used to be," Don says. "I never thought I would be dependent on so many at 57."

A Quest for Understanding

"I never wanted anyone's pity," Don says. Unfortunately, having to face pity, misunderstanding and fear from outsiders is an unavoidable consequence of having this highly stigmatized condition.

When out in public, the movement, balance and speech issues that accompany the progression of Don's disease causes strangers to jump to false, hurtful conclusions. On more than one occasion, Libby and Hadley have heard people say "Oh, he must be drunk," when their father has trouble staying steady on his feet, or starts slurring his words.

As hurtful as such comments are, Don understands that such conclusions are made due to misinformation and misunderstanding of the disease. "Often people don't have patience or don't take the time to learn, but through education, compassion and empathy are found," he says. "I think a great starting point is for people to be aware and be kind."

Beyond the obvious social stigma of PD, there is also an "invisible stigma" that exists. This invisible stigma is best described in a paper published in the October 2013 edition of the Journal of the American Association of Nurse Practitioners: "The invisible stigma was that of a changing self, a self with Parkinson's disease, a form of disability, which attested to the stigma and mounting isolation. Feelings of isolation were exacerbated by both the stigmatization associated with being different, coupled with the realization that life would never be the same," writes author Melinda Hermanns, an associate professor with the University of Texas at Tyler, School of Nursing.

Through all of their trials, the Horton clan has managed to stay strong; using the challenges that it has presented them with as opportunities to grow, personally and professionally.

Don believes that the lessons his daughters are learning, as difficult as they are, will serve them well when they get older. "I have to believe that they will be the most incredible human beings because they not only witness but support and help," he says.

After an embarrassing locker room incident in which Don was unable to button his own shirt due to the associated tremors, Maura saw a way to help people with this disease and other conditions that cause mobility issues to maintain some of their independence. She created a line of men's and women's dress shirts with magnetically-infused buttons, called MagnaReady.

"PD makes me laugh, cry, and experience humility and strength," Maura says. "Watching my husband's path changes daily but I can only hope someday that PD's outward symptoms will be as accepted as a beautiful, bald-headed cancer survivor!"

To those with PD, Don says "Have patience. Surround yourself with good people. Don't isolate and keep moving!" For their caregivers, he says "Always remember: if we could, we would. We appreciate all you do! It doesn't go unnoticed."