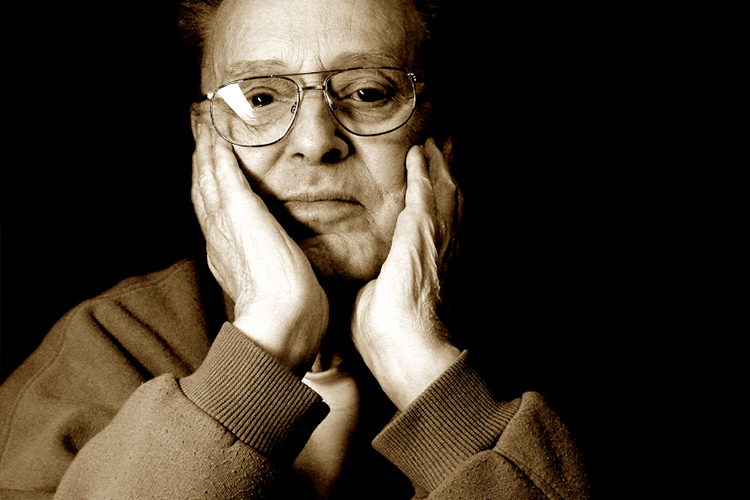 People stare. Most are not unkind, they are just curious. But when someone "different" from the norm becomes part of their environment, they often gawk without thinking about or understanding how this affects others.

Anyone who has cared for a disabled child or has a visible disability of their own knows this. However, people who care for an elder with dementia may have more difficulty coping with the stares of the public because the person they are caring for was once their dignified father or charismatic mother. The pain of seeing others stare, not knowing how this person was robbed of his or her cognitive abilities, has the potential to bring out the defensive protector that lies within each of us.

In addition to this public pressure, when I used to take my father to his frequent doctor's appointments at the local clinic, I was also faced with the challenge of not knowing which version of Dad I would be escorting.

Dad's dementia descended, full blown, overnight following a surgery. He was a dignified intellectual, who made it his life's work to be considerate and caring to others. But now he was suddenly capable of becoming a spectacle at a moment's notice. When Dad was sleepy and I was wheeling him into the clinic, he was basically ignored. I could take him to his appointments in the para-transit bus, they would wheel him off and I would be on my own with dad in the clinic. A sleepy Dad was a quiet Dad, so he didn't stir much interest.

Sometimes he was awake enough to know what we were doing, but those times were fairly low key as well. Anyone paying attention could note issues, but those sideways looks came and went quickly.

On the other hand, when Dad was deep into one of his ultra-demented states, he did provide quite a show. A time I remember well was an instance when he was alert and happy as could be. This should have been a positive thing, but in that mode, he was loudly having a conversation with someone who was not there, in Spanish, his second language. He was waving to "his public" as if he was riding on a parade float. Of course, people stared. And the little brat in me wanted to yell, "He's smarter than any of you! He can't help this, so stop staring!"

How did I cope with stares from strangers when I was in public with my father who suffered from severe dementia?

I didn't say anything. But I became painfully aware of what spouses and adult children go through when their dementia-stricken loved one has an "episode" while out in public. Many people use terms like "acting out." Whatever anyone wants to call this behavior, it usually draws a great deal of unwanted attention. Because we know our elder cannot help it, we are compassionate, protective and perhaps, defensive.

The Alzheimer's Association Helps Out

As an elder care columnist, I receive many e-mail questions. I recently answered one woman who was very disturbed at how her father was stared at in a grocery store. She had taken him to this very familiar place, but something triggered fear or paranoia in him while they were there. She had struggled getting him to the car, and she could feel the eyes of nearly everyone in the store upon them.

People were not unkind. In fact, they likely felt sorry for her, but she did not want their pity. She merely wanted to cope with the problem and get home.

After my reply was published in the newspaper, I was contacted by the Alzheimer's Association. They are now training people to go into civic groups or places of employment to talk with employees about how to help caregivers and/or a person with Alzheimer's. They teach that the most effective way to show compassion is to minimize the fuss. I applaud the efforts of this fine organization.

But How Do Caregivers Cope?

As with so many things, caregivers can cope better if they realize that:

You know your parents. You do your best to keep them safe and content. But the disease is unpredictable, and people in the earlier stages of dementia often like getting out of the house. Caregivers need to make caregiving a priority and try not worry about what others think.

If you had a child who used a wheelchair, you would have learned the skills needed to ask for help and be able to deflect stares knowing that most are rooted in curiousity or sympathy rather than cruel intentions. You would just keep doing what you need to do.

Being caregivers to the people who once cared for us requires the development of those same skills. I am grateful that I kept my defensive thoughts to myself when Dad was the target of unwanted attention. I knew they were just transient thoughts and wasn't even tempted to vocalize them. I had to laugh at myself later. However, the fact that I had these thoughts at all made me realize that I needed to actively care less about what others thought. It was Dad who truly mattered. What other people thought was a relative non-issue.

As a caregiver’s responsibilities increase, learning to focus on the task at hand is crucial. Thankfully, there are more organizations promoting awareness of the common challenges of dealing with differing abilities. Educating others and helping them to understand these difficult situations has a lasting impact and is far more constructive than a knee-jerk defensive reaction.