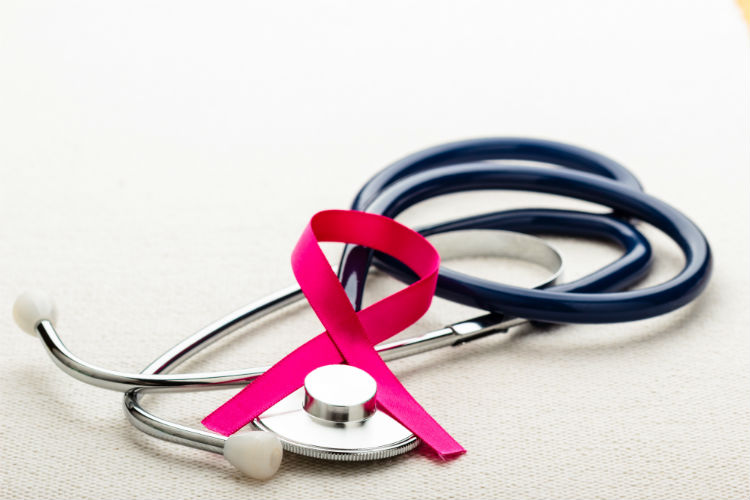 Breast cancer is a disease in which malignant cancer cells form in the tissues of the breast. The breast is made up of lobes and ducts. Each breast has 15 to 20 sections called lobes, which have many smaller sections called lobules. Lobules end in dozens of tiny bulbs that can produce milk. The lobes, lobules, and bulbs are linked by thin tubes called ducts. Each breast also has blood vessels and lymph vessels.

Risk factors for breast cancer include the following:

Breast cancer is sometimes caused by inherited gene mutations (changes). The genes in cells carry the hereditary information that is received from a person's parents. Hereditary breast cancer makes up approximately 5% to 10% of all breast cancer. Some altered genes related to breast cancer are more common in certain ethnic groups.

Tests that examine the breasts are used to detect (find) and diagnose breast cancer in elderly people. A doctor should be seen if changes in the breast are noticed.

The following tests and procedures may be used:

Mammogram: An x-ray of the breast.

Biopsy: The removal of cells or tissues so they can be viewed under a microscope by a pathologist to check for signs of cancer. If a lump in the breast is found, the doctor may need to remove a small piece of the lump. Four types of biopsies are as follows:

Chance of Recovering From Breast Cancer

The prognosis (chance of recovery) and treatment options depend on the following:

There are different types of treatment for elderly people with breast cancer. Some cancer treatments are standard (the currently used treatment), and some are being tested in clinical trials. A treatment clinical trial is a research study meant to help improve current treatments or obtain information on new treatments for patients with cancer.

Five types of standard treatment are used for elderly seniors with breast cancer:

Most patients with breast cancer have surgery to remove the cancer from the breast. Some of the lymph nodes under the arm are usually taken out and looked at under a microscope to see if they contain cancer cells. Breast-conserving surgery, an operation to remove the cancer but not the breast itself, includes the following:

Patients who are treated with breast-conserving surgery may also have some of the lymph nodes under the arm removed for biopsy. This procedure is called lymph node dissection. It may be done at the same time as the breast-conserving surgery or after. Lymph node dissection is done through a separate incision. Other types of surgery include the following:

Hormone therapy is a cancer treatment that removes hormones or blocks their action and stops cancer cells from growing. Hormones are substances produced by glands in the body and circulated in the bloodstream. Some hormones can cause certain cancers to grow. If tests show that the cancer cells have places where hormones can attach (receptors), drugs, surgery, or radiation therapy is used to reduce the production of hormones or block them from working. The hormone estrogen, which makes some breast cancers grow, is made mainly by the ovaries.