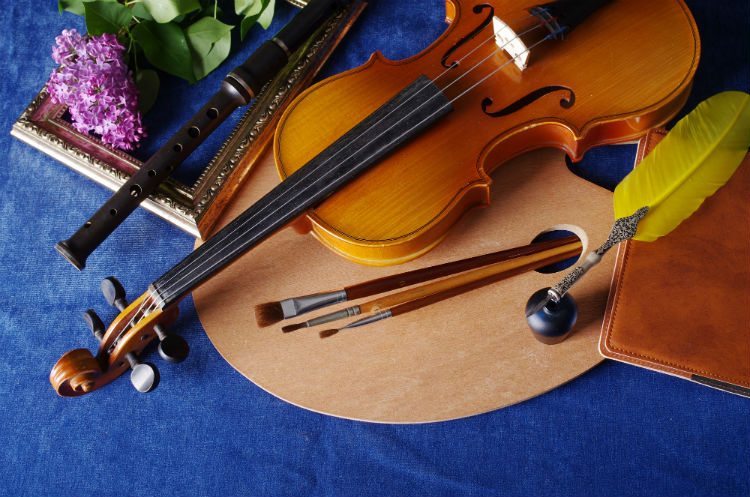 It may seem as though Parkinson's disease (PD) and art operate at cross purposes. Engaging in art-related activities has been shown to help people with PD feel less isolated and be able to fully express themselves.

How can individuals with a disease marked by limb tremors and muscle rigidity be drawn to creative pursuits that so often depend on deftness and dexterity?

Yet, numerous studies have shown art and the disease share an intimate, if indistinct, interconnection. Many clinics and adult day centers have adopted various forms of art therapy programs for people living with PD. Painting in particular is now recognized as one of the most effective art therapy programs in the world for people with Parkinson’s.

Scientists are still trying to tease out the relationship between PD and creative endeavors. Some researchers have found a link between newly-awakened creativity and PD treatment. Other studies indicate that the changes in brain chemistry caused by the disease itself may play a role in helping people tap into their inner artist.

Whatever the cause, the fact remains that creative endeavors can help people not only to cope, but to thrive, even in light of a dark diagnosis.

Here are three real-life examples of individuals who have found a refuge from PD in the pursuit of art.

Chip Colley was an outdoorsman, not an artist. "I had friends who were artists, but I couldn't paint at all," he says.

Colley grew up fishing with his father on the Escambia Bay near his hometown of Pensacola, Florida. When his son, Zachary, was old enough, Colley introduced him to the timeless father-son tradition of pre-dawn angling.

And, when he was first diagnosed with PD, Colley fled to the cypress bog behind his house to reflect on this new, largely unwelcome phase of his life.

Early on in the disease, he was hit hard by bouts of insomnia that would last until three o'clock in the morning. Not a huge fan of television ("It stresses me out."), he struggled to occupy these sleepless nights.

During the day, Colley frequented the three art galleries in town. He enjoyed perusing the creations of the professional artists until one day, one of those artists came up to him and asked, "Why don't you try to paint something?"

He initially dismissed the idea outright. "My hands were always shaking so hard that I couldn't even write my own name," he says.

However, during one of the endless, empty nights, Colley made a decision that would forever alter his outlook on his disease. He grabbed a sheet of paper and some pencils and began to draw.

To his surprise, the drawings turned out "pretty good." Colley began to expand his scope, digging through boxes of his children's old art supplies. "I started painting with anything I could get my hands on," he says.

He had questions about his newfound penchant for portraiture, but continued to allow his creative juices to flow. The next time Colley went to his neurologist for a checkup, he presented the doctor with a stack of paintings and asked, "What's this about?"

The physician was impressed, but not surprised by Colley's prowess. He suggested Colley enroll in a study about PD and creativity being conducted by the University of Florida. "We walked in and they just handed us a bag of art supplies and told us to do our thing."

Colley's art has gradually gotten better. He prefers painting and sculpting, sometimes combining the two to create paintings with embossed surfaces. "It's been great. I've met so many people since I started doing art," he says. "When you're focused on a project, you tend not to think about your physical problems. It just takes you away."

His advice for fellow sufferers: "Pick up a paintbrush, dance, sing. Do anything you want, but do not just sit there. Enjoy your life. I'm considered an artist now. I would never have dreamed it in a million years."

The Old Sailor with PD

Robert Bartoo describes himself as "an old sailor who has Parkinson's disease," but he is first and foremost a storyteller.

"Once you get me started, I spin terrible tales," he admits. It is an endearing aspect of his personality that has endured despite his diagnosis.

As a young man, Bartoo spent eight years sailing on the Great Lakes. Once he reclaimed his land legs, he decided to open up the Sea Shanty Restaurant, a tavern that turned into an unintentional hot spot for Vietnam veterans to congregate and commiserate.

The stories he heard in that bar were the catalysts that initially ignited Bartoo's passion for telling tales. "All of my creativity came out of that need to tell their story; it just poured out of me."

Bartoo's first stage play, "A Night to Remember," dealt with the difficult homecoming of a Vietnam veteran suffering from both post-traumatic stress disorder (PTSD) and PD. Over the years, it has been performed on multiple stages, was featured at the Vietnam Veterans Memorial in Washington, D.C., and was turned into a 90-minute broadcast for NPR.

The irony is not lost on Bartoo that, years after penning his play, he too was diagnosed with PD.

After listening for years to the tales of returning vets who struggled to find a place in a society that refused to accept them, Bartoo suddenly found himself in a similar situation. His trembling hands would cause food to fall from his fork or change to spill out of his wallet; people spoke to him in condescending tones, making him feel embarrassed and alone.

So he did what all creatives do when they experience pain, he turned it into art. This time he used music to get his message across.

"Music has always been uplifting to me; it's so different, it really carries you away. If I didn't have music, I don't think I'd still be around."

He composed a series of songs specifically about PD and compiled them onto a CD called "Riding the Winds With Parkinson's." Bartoo hopes his songs will serve as a source of inspiration for people dealing with the disease, as well as their caregivers.

"I have a soft spot in my heart for caregivers. They do incredibly good work for other people," he says.

Kathryn Jenkins comes from a family of sewers. Her mother sewed, her grandmother sewed, and she and her sisters sew too.

Jenkins' life-long passion for stitching was too strong to be squashed by the diagnosis she received 11 years ago. "My mom made every one of her seven children their own individual quilts. I think that's what got me started with quilting," she says.

She has undergone deep brain stimulation (DBS) and takes medications to treat her symptoms, but Jenkins has found an equal amount of relief in making quilts for her friends and family members.

"I don't think about the disease when I'm quilting. I'm simply tuned in to what I'm doing," says Jenkins. "If I am at home, you will find me at my sewing machine. I think I'd rather do that than eat."

Her recommendation to people taking care of a loved one with Parkinson's: "Encourage them to get started on something they're passionate about. Do not let them just sit at home and feel sorry for themselves. If they do that, then they'll just start to worry about how they feel and it's not good to think like that."

Here are some tips for keeping seniors busy and active, no matter where they live.