"Last week, I began a series about people I know who seem to be aging well. Here’s the second installment, which appears just as my friend Daniel sent it to me. This is a perfect example of what I mean by "aging well." It's not, as the media suggest, swimming the English Channel at an advanced age. It's aging happily and successfully, day by day."

I’ve been a friend of John’s for 23 years. A week ago, he told me he was beginning an “aging well” series on his blog, and asked if I would briefly profile my 97-year-old mother, Margaret. The two of them met some years back, and John hears occasional updates from me about her life and well being.

This past weekend, I told my mother about John’s request. Would she mind if I wrote something about her… something that would be posted on John’s very public blog? A private person, my mom surprised me with her answer: “Anything for John.”

Margaret lives happily in her own home with Wheeler, her beloved brown tabby cat. She cooks and cleans, manages her own affairs, still plays the piano a little, and takes care of her small lawn and garden. Last month, while looking for a yardstick in a closet at my mother’s house, I found her yearbook from Pottsville (PA) High School, class of 1936. Here’s her graduation photo in that book, taken when she was 17 years old: 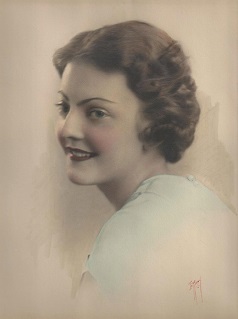 The comments written by her many friends 79 years ago included several repeated phrases, like “best friend,” “wonderful musician and singer,” “so much fun,” “happy,” and “don’t ever change.” I realized that my old mum is the same person her classmates admired so long ago. Those teenagers sought the pleasure of her company just as people do now.

If asked, my mother would modestly describe herself as a simple, ordinary person. But her special gifts are anything but ordinary. Those gifts have brought my mother safely and happily to this amazing time in her life. I’ll list a few of them here to help explain why she might be “aging well.”

A Gift for Friendship

If you were ever my mother’s friend, you still are… unless you died.

She lets others talk. If you have a problem, she’ll suggest a sensible solution… but only if you ask for one. She knows that people often just want someone to listen, and not to volunteer unsolicited “sage advice.”

Margaret won’t hold a grudge. She sees forgiveness as a simple, conscious act of will. Her friends depend on her discretion. My mother knows everyone’s secrets, and everyone knows their secrets are safe with her.

As I think on it, I would often find my own friends, from elementary school onward in the kitchen, talking with my mother. Even they knew my mom was a good person to talk to… trustworthy and fun.

A Gift for Music

When he was a very young man, my mother’s father played the piano in theaters during silent movies, watching the grainy images on the screen and improvising a soundtrack. He didn’t read music and didn’t need to. Once he heard a song, he could play it in any key, with complex harmonies, all ten fingers on the keyboard. He had a rare gift, and my mother inherited a big chunk of it.

During all four years of high school, she was the pianist for the orchestra and chorus, and the accompanist for all soloists. For many years after that, she was the church’s choir rehearsal pianist. At home, she played our piano every day and sang her favorite songs. All these years later, I still recall the words to many of them, like “Tenderly,” “Small Hotel,” “My Ideal,” “Bill,” “I’ll Take Manhattan,” and “Young at Heart.”

Okay, I admit… I was slightly appalled the afternoon I came home from school in 1965 and caught her singing along to the Beatles’ song “Yesterday” on the radio. Hey, that was MY music! But there was music, every day… an ongoing passion for creating it, and sharing it a life-giving joy, a pleasure, a therapy. It remains a happy part of my mother’s life today.

A Gift for Foolishness

My mother has always made room for fun, for humor that still takes us by surprise. Here is just one of a hundred examples I could share:

As a college freshman many years ago, I was a little homesick, and looking forward to the upcoming Christmas holiday, which would be my first trip home. Before dinner, I walked to the student center to use one of the pay phones there to call home.

The telephone operator took my info, initiated the call, and, when my mother answered the phone, asked a question only people of a certain age will recognize: “I have a collect call from Daniel. Will you accept the charges?”

“Yes,” my mother answered. After we talked for a minute, I brought up my favorite subject: food. My mother asked, “Is there anything special you’d like me to make?”

Pushing a boundary, I said, “I want all kinds of good sh*t when I’m home.”

“Daniel, you know I don’t want to hear you talk like that.”

After a perfect pause to let the moment sink in, she asked, “Now exactly what kind of good sh*t do you want?” We laughed together, and her 18-year-old son thought she was the coolest mother in the world.

That gift for humor brightened our home life, and eased many difficult moments. It still does.

The Gift of Selflessness

Margaret would much rather listen to you than talk about herself. She’d say, “I can’t learn anything new if I do all the talking.”

We all know people who are quick to complain, “He never stops talking about himself. I can’t get a word in edgewise!” Not my dear old mum. She’s 97 years old. There are plenty of health issues she could complain about. But I never hear a peep.

I hear her on the phone, not yammering on and on about herself, but asking questions, listening. She is genuinely interested in the details of other people’s lives, which is a rare gift these days. Margaret’s selflessness helps her navigate her old age with dignity, poise, humility and grace.

The Love of Animals

In the 1920s and ‘30s, Margaret grew up with dogs in the house. Pepper, a wise mutt, adopted our family in the 1950s. Then came Duke, the wire-haired fox terrier she holds here: 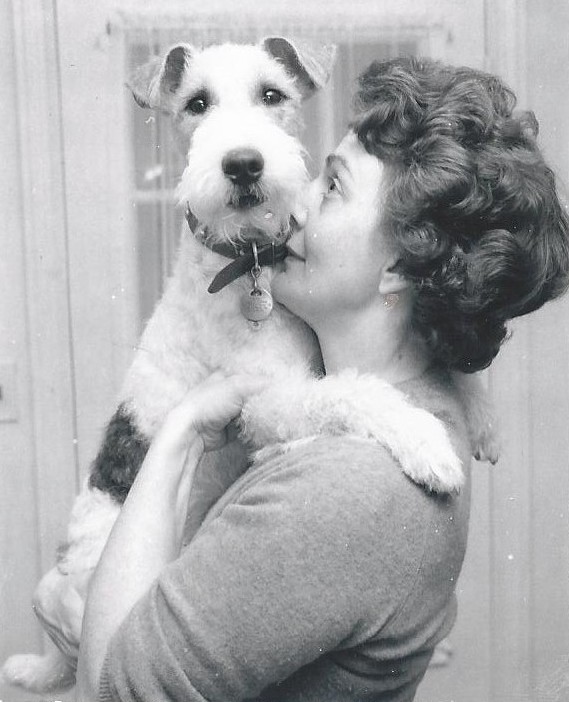 The wild creatures have always mattered, too. Mother feeds the squirrels, birds, and chipmunks. She actually shells the peanuts they all love. She fills the birdbath each day, and loves watching the robins, bluejays, cardinals, and wrens who come to drink and splash.

I’ve heard her say she feels sorry for people who don’t love animals.

Now, at 97, she lives with her cat Wheeler. He sleeps in the bed and sits on her lap when she watches television. She talks to him and he responds. They eat breakfast, lunch, and dinner together. Wheeler gives my mother “something” to love, to care for. He helps regularize her days. He’s a sensational, affectionate, no-fuss companion. They are devoted to one another, and I know that Wheeler is helping my mother “age well.”

Here’s Margaret – on her 95th birthday two years ago – holding Wheeler. Uncharacteristically, he looks like he’d prefer to be someplace else. 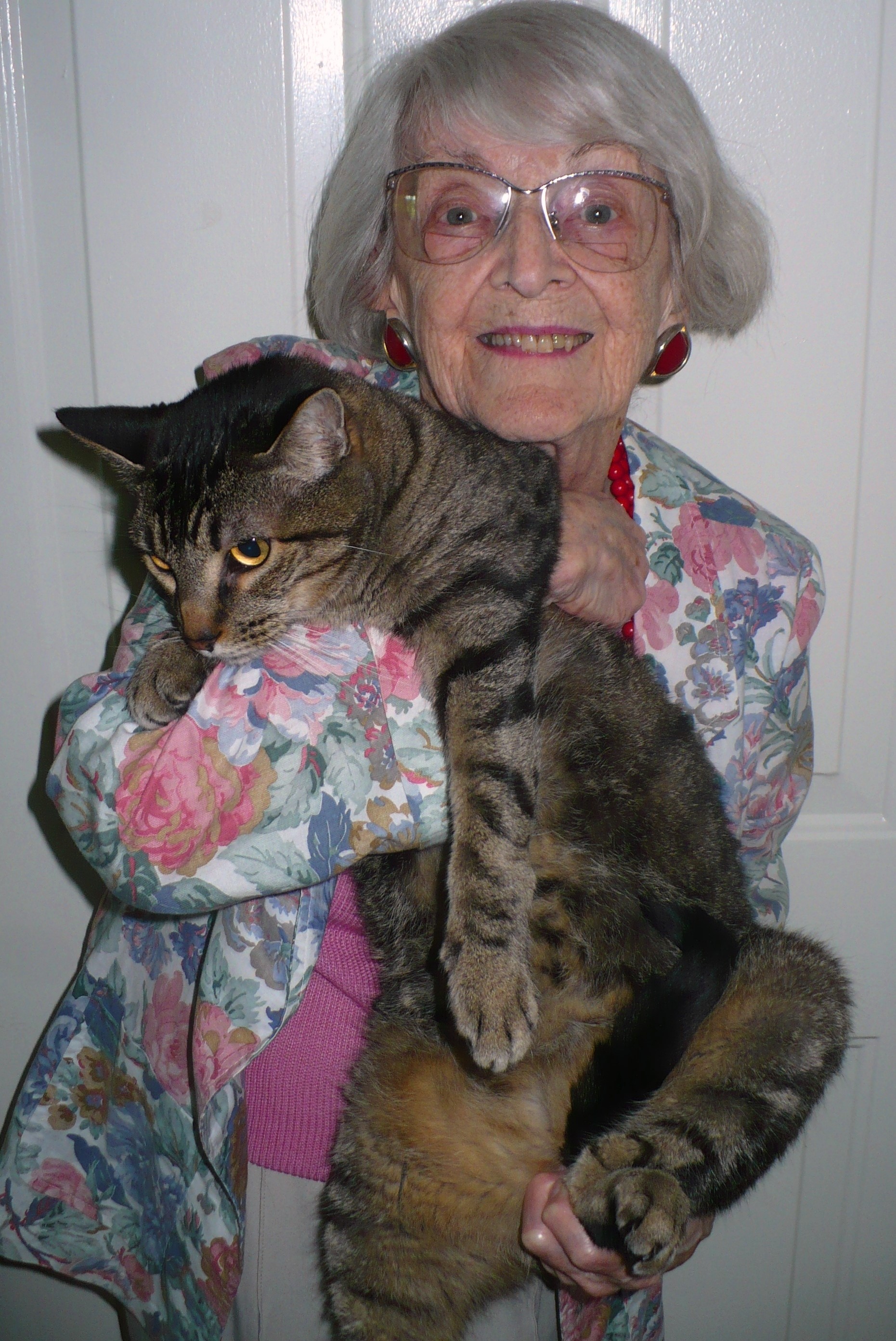 The Gift of Joy

My mother has always found uncommon pleasure in simple things: A fresh June day; Beautiful music; A conversation with a friend; A thunderstorm from the safety of home; A poem; The moon; A card game; Somebody’s funny story.

Her delight in these simple little things is still contagious. As our family filed out of Ascension Lutheran Church in Towson, Maryland, after the 11 o’clock service half a century ago, Pastor Oscar Carlson said something I’ll never forget: “Margaret always looks like she's expecting something wonderful to happen.”

I think he knew my mother had that gift of joy.

The Gift of Gratitude

Recently, my mother has occasionally said something to me I’ve loved hearing: “I am so lucky, living a charmed, wonderful life. I want you to know that if I had it all to do over again, I wouldn’t change a thing.”

What a gift for a “child” to hear from an elderly parent! It’s a declaration I’ll always remember… and one I’ll lean on in the years ahead.

The last time my mother made that comment, she decided to add a footnote. “Wait a minute,” she said. “I guess I did make one big mistake.”

“Marrying your father,” she answered, sparking laughter all around.

On her 93rd birthday, I asked my mother to recite a poem she’d written in the 1950s for a friend. This short clip reveals more about her than anything I’ve written here.

Healthy Aging
Be the first to comment
Related Articles