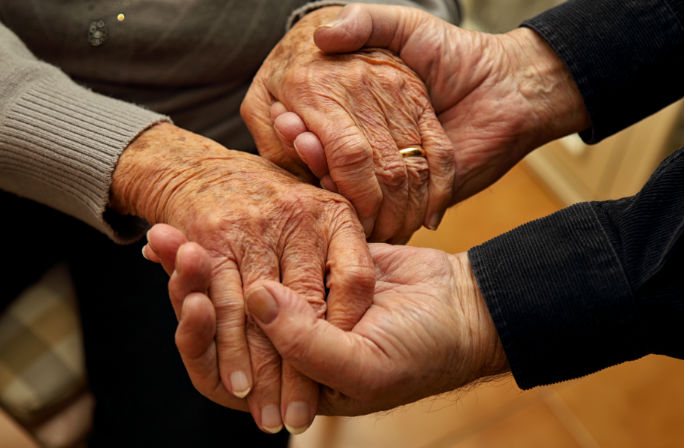 Donna Daisy knows firsthand that life doesn’t always go according to plan. After years of working hard and raising their children, Donna, a life coach, and her husband, Charley, a physician, were looking forward to semi-retirement. But shortly after the couple started wintering in Florida in 2005, a devastating and painful infection took hold of Charley’s body. Over the course of four years, Charley underwent 40 surgeries, including the amputation of one leg, and became wheelchair bound. The doctor became a patient and Donna was thrust into the role of full-time caregiver.

For the first few months, the couple experienced a host of emotions, including anger, depression and hopelessness. “There was a lot of, ‘How are we going to be happy?’ ” Donna recalls. They blamed the medical community and God for their misfortune, but when it became evident that Charley might never get better, they realized their dialogue could doom them. So, they made a choice.

“We realized we could spend the time we had left feeling angry and sorry for ourselves, or we could choose to make every day the best one yet,” says Donna. “That’s what we did.” Making a conscious effort to stay as upbeat as possible was a major challenge for the couple, but it eventually became their passion.

Donna gave up the career she loved to become Charley’s primary caregiver, and the stress was overwhelming at times. Like many caregivers, Donna acknowledges that she sometimes felt lost in her new role. “I think it happens because you just don’t have time for yourself, or if you do, you feel guilty about it,” she admits.

To cope, Donna learned how to create a personal strategy and purpose for herself. First, she took time out from caregiving each day—even if it was just a few minutes—for her own self-care. Walking the dog became Donna’s daily “me time” and led to a camaraderie with neighbors whom she would talk to along her route. They became part of her support system and provided the brief respite and social interaction she needed. “It was amazing what a shot in the arm that gave me,” she says of her daily walks.

Donna counsels other caregivers to do their best to avoid caregiver burnout by setting limits and asking family members or friends for help as often as needed. For caregivers who may not have that option, Donna recommends investigating other options, such as in-home care and respite programs. Support groups are also a beneficial option to remind caregivers that they are not alone in their journey. “Research shows that social support is one of the best buffers to stress,” notes Donna.

Stress can manifest itself in physical ways, such as illness, so taking care of your own health needs is paramount, says Donna. Be sure to eat well, exercise and get enough sleep. “If you don’t take care of you, you can’t give your best self to anyone,” Donna urges. “Taking care of yourself isn’t a selfish thing.”

The act of caregiving can also help people learn their personal and emotional needs. Donna suggests getting in touch with your thoughts, whether positive or negative, to determine what triggers each reaction. It’s usually not the circumstance that makes a person feel good or bad. It’s a person’s reaction to that circumstance.

“It’s easy to focus on what’s going wrong,” says Donna. “It takes discipline to think positive thoughts. We can decide how we’re going to look at this segment of our lives as caregivers. It always begins with a choice. Am I going to be a victim or a survivor? That’s a tough choice, and I’m not making light of it. It’s a sacrifice to be a caregiver.”

Throughout Donna’s caregiving experience, she and her husband worked daily to focus on the positive. Despite all the surgeries and doctor’s appointments, they concentrated on everything that was good in their lives. They lived in a community they loved and had close friends who stopped by regularly to visit. They raised successful children who, with their own children, came to see them as often as possible. But what the couple didn’t expect was how their caregiving experience would impact their relationship.

“We had a happy marriage before Charley’s illness,” Donna recalls, “but we were busy professionals. Because of his illness, we gained a closeness that didn’t compare to what we had before. The emotional intimacy over that time deepened. It was an amazing thing to happen."

That intimacy gave new purpose and meaning to the couple’s life. When Charley died in 2010, just a few weeks after he and Donna celebrated their 50th wedding anniversary, no words or emotions had been left unsaid. It was their greatest gift to each other.

Today, Donna has resumed her career as a life coach and has written a book about her caregiving experience. A frequent speaker, she counsels people of all ages on the importance of staying upbeat and finding happiness, even in the most desperate situations.

“There’s always another way to look at things,” she assures. “It is my hope that people choose the one that’s more positive.”

7 Steps to a Positive Caregiving Experience